Child of a Dead God 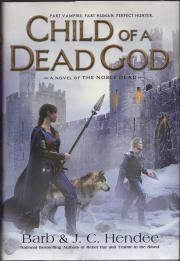 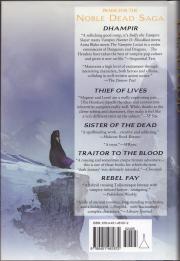 I lager
1 st.
"A mix of The Lord of the Rings and Buffy the Vampire Slayer, "* the Noble Dead Saga has won legions of readers with its epic adventure, bloodthirsty evil, and imaginative characters. At last, long-sought secrets will be revealed...and old scores settled.

For many months, Magiere and Leesil have searched for a forgotten artifact, even though its purpose has been shrouded in mystery. All Magiere knows is that she must keep the orb from falling into the hands of a murdering Noble Dead: her half brother, Welstiel. And now dreams of a castle locked in ice lead her south, on a Journey that has become nothing less than an obsession.

Accompanying Magiere and Leesil are the sage Wynn; their canine protector, Chap; and two elven assassins-turned-guardians who must fight their distrust of this sister of the dead. For forces more powerful than they—some may even say fate—are rallying around Magiere, arming her for the conflict to come, because finding the orb may be just the beginning of the challenges that await her