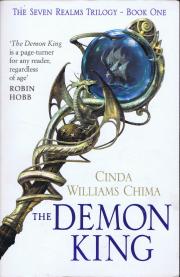 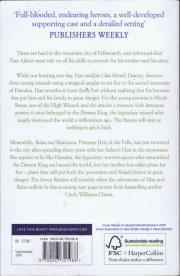 Times are hard in the mountain city of Fellsmarch, and reformed thief Han Alister must rely on all his skills to provide for his mother and his sister.

While out hunting one day, Han and his Clan friend, Dancer, discover three young wizards using a magical amulet to set fire to the sacret mountain of Hanalea. Han wrestles it from them, but without realising that his heroism has put him and his family in great danger. For the young arsonist is Micah Bayar, son of the High Wizard, and the amulet a treasure with immense power; it once belonged to the Demon King, the legendary wizard who nearly destroyed the world a millennium ago. The Bayars will stop at nothing to get it back.

Meanwhile, Raisa ana'Marianna, Princess Heir of the Fells, has just returned to the city after spending three years with her father's Clan in the mountains. She aspires to be like Hanalea, the legendary warrior-queen who vanquished the Demon King and saved the world, but her mother has other plans for her - plans that will put both the queendom and Raisa's future in great danger. The Seven Realms will tremble when the adventures of Han and Raisa collide in this stunning new page-turner from bestselling author Cinda Williams Chima.