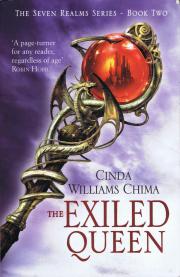 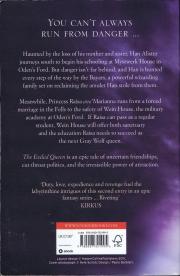 The second book in an epic fantasy series from Cinda Williams Chima. Adventure, magic, war and ambition conspire to throw together an unlikely group of companions in a struggle to save their world. You can't always run from danger...

Haunted by the loss of his mother and sister, Han Alister journeys south to begin his schooling at Mystwerk House in Oden's Ford. But danger isn't far behind, and Han is hunted every step of the way by the Bayars, a powerful wizarding family set on reclaiming the amulet Han stole from them.

Meanwhile, Princess Raisa ana'Marianna runs from a forced marriage in the Fells to the safety of Wein House, the military academy at Oden's Ford. If Raisa can pass as a regular student, Wein House will offer both sanctuary and the education Raisa needs to succeed as the next Gray Wolf queen.

The Exiled Queen is an epic tale of uncertain friendships cut throat politics, and the irresistible power of attraction.