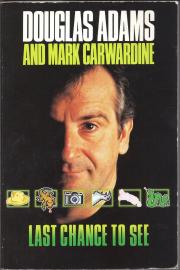 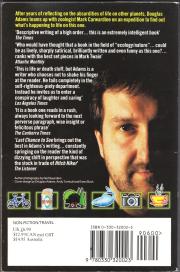 The record of an odyssey by a zoologist and a zoologically-innocent comic novelist. It began in 1985 with a search for a rare lemur in Madagascar and went on to include expeditions which witnessed fruitbats, man-eating lizards, gorillas, a blind dolphin and the most inept parrot, the kakapot. After years of reflecting on the absurdities of life on other planets, Douglas Adams teams up with zoologist Mark Carwardine on an expedition to find out what's happening to life on this one.

'Descriptive writing of a high order.... this is an extremely intelligent book' The Times

'Who would have thought that a book in the field of "ecology/nature"... could be as lively, sharply satirical, brilliantly written and even funny as this one? ranks With the best set pieces in Mark Twain' Atlantic Monthly

'This is life or death stuff, but Adams is a writer who chooses not to shake his finger at the reader. He fails completely in the self-righteous-piety department. Instead he invites us to enter a conspiracy of laughter and caring' Los Angeles Times

'It is a book one reads in a rush, always looking forward to the next perverse paragraph, wise insight or felicitous phrase' The Canberra Times

'Last Chance to See brings out the best in Adams's writing... constantly springing on the reader the kind of dizzying shift in perspective that was the stock in trade of Hitch Hiked' - The Listener