Trustpilot
Du är på: Författare » Douglas Adams » The hitchhikers guide to the galaxy » So Long, and Thanks for All the Fish

So Long, and Thanks for All the Fish 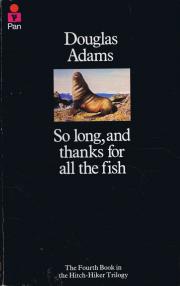 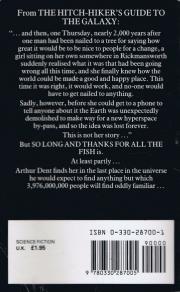 I lager
1 st.
From The Hitch-hiker's guide to the galaxy:
"... and then, one Thursday nearly 2,000 years after one man had been nailed to a tree for saying how great it would be to be nice to people for a change, a girl sitting on her own somewhere in Rickmansworth suddenly realised what it was that had been going wrong all this time, and she finally knew how the world could be made a good and happy place. This time it was right, it would work, and no-one would have to be nailed to anything.

Sadly, however, before she could get to a phone to tell anyone about it the Earth was unexpectedly demolished to make way for a new hyperspace by-pass, and so the idea was lost forever. This is not her story...."

But So long and thanks for the all the fish is. At least partly...
Arthur Dent finds her in the last place in the universe he would expect to find anything but which 3,976,000,000 people will find oddly familiar...