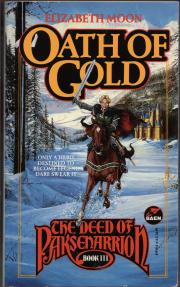 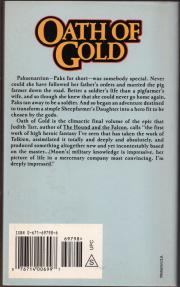 Paksenarrion — Paks for short — was somebody special. Never could she have followed her father's orders and married the pig farmer down the road. Better a soldier's life than a pigfarmer's wife, and so though she knew that she could never go home again, Paks ran away to be a soldier. And so began an adventure destined to transform a simple Sheepfarmer's Daughter into a hero fit to be chosen by the gods.

Oath of Gold is the climactic final volume of the epic that Judith Tarr, author of The Hound and the Falcon, calls "the first work of high heroic fantasy I've seen that has taken the work of Tolkien, assimilated it totally and deeply and absolutely, and produced something altogether new and yet incontestably based on the master...(Moon's) military knowledge is impressive, her picture of life in a mercenary company most convincing. I'm deeply impressed."