Thunderer: A Novel of High Fantasy 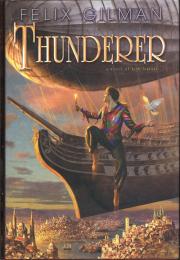 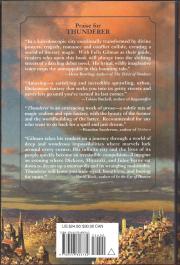 I lager
1 st.
In this breathtaking debut novel by Felix Gilman, one man embarks on a thrilling and treacherous quest for his people’s lost god—in an elaborate Dickensian city that is either blessed …or haunted.

Arjun arrives in Ararat just as a magnificent winged creature swoops and sails over the city. For it is the day of the return of that long-awaited, unpredictable mystical creature: the great Bird. But does it come for good or ill? And in the service of what god? Whatever its purpose, for one inhabitant the Bird sparks a long-dormant idea: to map the mapless city and liberate its masses with the power of knowledge.

As the creature soars across the land, shifting topography, changing the course of the river, and redrawing the territories of the city’s avian life, crowds cheer and guns salute in a mix of science and worship. Then comes the time for the Bird’s power to be trapped—within the hull of a floating warship called Thunderer, an astounding and unprecedented weapon. The ship is now a living temple to the Bird, a gift to be used, allegedly, in the interests of all of Ararat.

Hurtled into this convulsing world is Arjun, an innocent who will unwittingly unleash a dark power beyond his imagining—and become entangled in a dangerous underground movement that will forever transform Ararat. As havoc overtakes the streets, Arjun dares to test the city’s moving boundaries. In this city of gods, he has come to search among them, not to hide.

A tour de force of the imagination, and a brilliant tale of rebellion, Thunderer heralds the arrival of a truly gifted fantasy writer who has created a tale as rich, wondrous, and captivating as the world in which it is set.