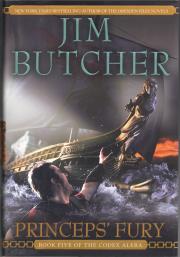 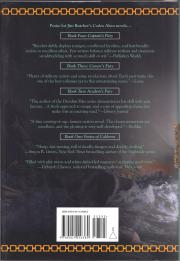 In the acclaimed Codex Alera novels, New York Times bestselling author Jim Butcher has created a fascinating world in which the people of Alera use their unique bonds with the elementals of nature for Protection.

Tavi of Calderon, now recognized as Princeps Gaius Octavian and heir to the Crown, has achieved a fragile alliance with Alera's oldest foes, the savage Canim. After a year of armistice, their occupation of Alera's shores has ended. But when Tavi and his Legions guide the Canim safely to their lands, his worst fears are realized.

The dreaded Vord—the enemy of Aleran and Cane alike—have spent the last three years laying waste to the Canim homeland. And when the Alerans are cut off from their ships, they find themselves trapped alongside their former enemies—with no choice but to fight shoulder to shoulder if they are to survive.

Meanwhile, after the destruction of the city and High Lord of Kalare, war-torn Alera struggles to rebuild—while politicians and nobles maneuver for power. But from the south comes news of death and devastation unlike any have ever known—for the Vord have come to Alera.

For a thousand years, Alera and her furies have withstood every enemy and survived every foe.

The thousand years are over...