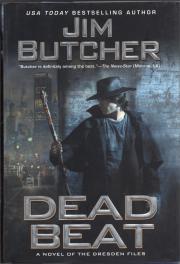 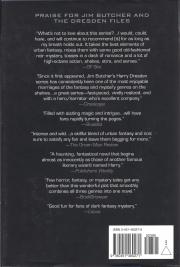 Filled with "kickass adventure and supernatural fireworks" (SF Site), Jim Butcher"s Dresden Files novels have been compared to Harry Potter with "an adult tone and attitude" (The News-Star). Now, in his first hardcover adventure, Harry Dresden must save Chicago from black magic and necromancy—all in a day's work for the city's only professional wizard.

There's an entire world that exists alongside the everyday life of mankind. There are powers, nations, monsters, wars, feuds, alliances—everything. Wizards are a part of it. So are a lot of other things you've heard about in stories, and even more you've never heard of.... Vampires. Werewolves. Faeries. Demons. Monsters. It's all real.

Harry Dresden knows full well that such creatures exist. Paranormal investigations are his stock-in-trade, and Chicago is his beat as he tries to bring law and order to a world that exists on the edges of imagination. Luckily Harry's not alone in this struggle. And though most inhabitants of the Windy City don't believe in magic, there's a department that's been set up within the Chicago PD to deal with "strange" cases: the Special Investigations department.

Karrin Murphy is the head of SI and a good friend of Harry's. So when a deadly vampire threatens to destroy Murphy's reputation unless Harry helps her, he has no choice. The vampire wants the Word of Kemmler and all the power that comes with it—but first Harry has to determine what the Word of Kemmler is. Now Harry is in a race against time—and six necromancers—to find the Word before Chicago experiences a Halloween night to wake the dead...