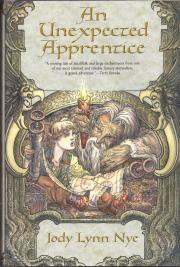 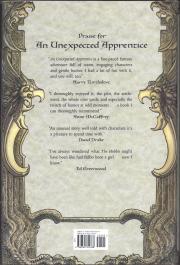 I lager
1 st.
Halfling Tildi Summerbee has led a typical, unexciting life, tending the house for her brothers while they manage the family farm. Her days are boring but happy...until a Thraik attack decimates her family.

In an effort to provide for Tildi, the town's leaders prepare an arranged marriage and take control of her farm's assets. After all, a female halfling is incapable of handling such things on her own. Tildi sees matters differently.

In order to escape her marriage and overcome the prejudices against the "weaker" sex, she decides to pass herself off as a man. Assuming the guise of her dead brother Teldo, Tildi disappears into the night. She plans to accept Teldo's position as an apprentice to a great wizard.

But the education she is about to receive may be more than Tildi bargained for. She soon finds that the rest of the world isn't very welcoming to halflings and that fantastic dangers lurk around every corner.

Dangers that are more than a match for a wizard's apprentice.

An Unexpected Apprentice is the tale of a marvelous quest of discovery in a dangerous and magical world where prejudices are not unlike those in our very own.