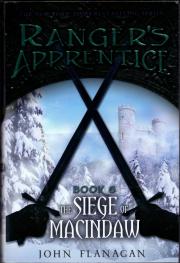 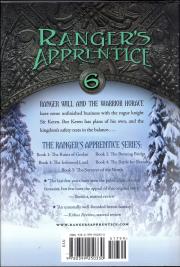 I lager
1 st.
The kingdom is in danger. Renegade knight Sir Keren has succeeded in overtaking Castle Macindaw and now is conspiring with the Scotti. The fate of Araluen rests in the hands of two young adventurers: the Ranger Will and his warrior friend, Horace. Yet for Will, the stakes are even higher. For inside Castle Macindaw, held hostage, is someone he loves.
For this onetime apprentice, the time to grow up is now.

The international bestselling series with over 5 million copies sold in the U.S. alone
After years as a Ranger's apprentice, Will is now the protector of his first fief. Not long into his service, everything that can go wrong does: Keren, a renegade knight, has taken over Castle Macindaw, a strategic gateway to the North--poisoning the royal family in the process--and is holding Will's friend Alyss captive. The situation grows direr when Will uncovers Keren's secret alliance with the Scotti, who have plans to plunder Araluen. Time is of the essence, and Will must recruit a motley crew to rescue Alyss and reclaim Castle Macindaw--before the Scotti can make it their own.

Perfect for fans of J.R.R. Tolkien's Lord of the Rings, T.H. White's The Sword in the Stone, Christopher Paolini's Eragon series, and George R. R. Martin's Game of Thrones/A Song of Ice and Fire series.