The Rose of the World 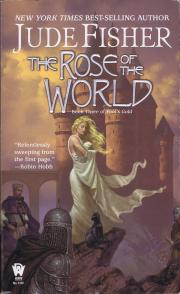 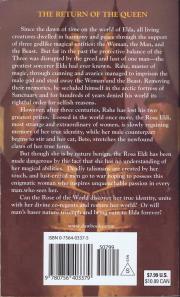 I lager
1 st.
Lässtreck på rygg, Rygg något snedSince the dawn of time on the world of Elda, all living creatures dwelled in harmony and peace through the support of three godlike magical entities: the Woman, the Man, and the Beast. But far in the past the protective balance of the Three was disrupted by the greed and lust of one man - the greatest sorcerer Elda had ever known. Rahe, master of magic, through cunning and avarice managed to imprison the male god and steal away the Woman and the Beast. Removing their memories, he secluded himself in the arctic fortress of Sanctuary and for hundreds of years denied his world its rightful order for selfish reasons.

However, after three centuries, Rahe has lost his two greatest prizes. Loosed in the world once more, the Rosa Eldi, most strange and extraordinary of women, is slowly regaining memory of her true identify, while her male counterpart begins to stir and her cat, Bete, stretches the newfound claws of her true form.

But though she is by nature benign, the Rosa Eldi has been made dangerous by the fact that she has no understanding of her magical abilities. Deadly talismans are created by her touch, and lust-crazed men go to war hoping to possess this enigmatic woman who inspires unquenchable passion in every man who sees her.

Can the Rose of the World discover her true identify, unite with her devine co-regents and restore her world? Or will man's baser nature triumph and bring ruin to Elda forever?