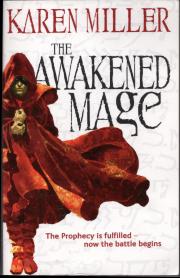 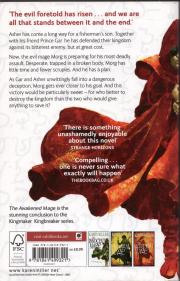 I lager
1 st.
"The evil foretold has risen ... and we are all that stands between it and the end."

Asher has come a long way for a fisherman's son. Together with his friend Prince Gar, he has defended their kingdom against its bitterest enemy, but at great cost.

Now, the evil mage Morg is preparing for his most deadly assault. Desperate, trapped in a broken body, Morg has little time and fewer scruples. And he has a plan.

As Gar and Asher unwittingly fall into a dangerous deception, Morg gets ever closer to his goal. And this victory would be particularly sweet?for who better to destroy the kingdom than the two who would give anything to save it?

'A writer who seems to set the rule for the genre' - Waterstones Books Quarterly 'Miller is clearly a very talented writer: her characterisation is a masterclass in nuance and sensitivity, and she has a visceral way with action' - SFX Prince Gar now has the magic for weatherworking and is able to keep his enemies at bay, while Asher has become the most powerful Olken in the history of Lur. Peace and prosperity seem assured for the two of them. But Morg, the evil sorcerer mage, remains trapped inside a shattered body. He knows his time is running out and that desperate measures are called for. Unwittingly, Gar and Asher become caught up in a dangerous deception which threatens to tear apart the kingdom and destroy the fragile balance between Olken and Doranen. And no one, not even Dathne and her secret Circle, is prepared for the consequences when the Innocent Mage is revealed at last . . . Following The Innocent Mage, this is the second and concluding volume in the bestselling Kingmaker, Kingbreaker series - a wildly fast-paced fantasy brimming with action and adventure. Books by Karen Miller: Kingmaker, Kingbreaker Series The Innocent Mage The Awakened Mage A Blight of Mages Godspeaker Empress of Mijak The Riven Kingdom The Hammer of God Fisherman's Children The Prodigal Mage The Reluctant Mage Tarnished Crown The Falcon Throne Prince of Glass