A Time of Exile 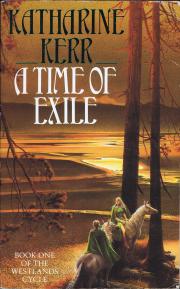 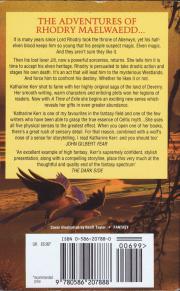 It is many years since Lord Rhodry took the throne of Aberwyn, yet his half-elven blood keeps him so young that his people suspect magic. Elven magic. And they aren't sure they like it.

Then his lost lover, Jill, now a powerful sorceress, returns. She tells him it is time to accept his elven heritage. Rhodry is persuaded to take drastic action and stages his own death. It's an act that will lead him to the mysterious Westlands. And force him to confront his destiny. Whether he likes it or not.

Katharine Kerr shot to fame with her highly original saga of the land of Deverry. Her smooth writing, warm characters and enticing plots won her legions of readers. Now with A Time of Exile she begins an exciting new series which reveals her gifts in even greater abundance.

"Katharine Kerr is one of my favourites in the fantasy field and one of the few writers who have been able to grasp the true essence of the Celtic myth! She uses all five physical senses to the greatest effect. When you open one of her books, there's a great rush of sensory detail. For that reason, combined with a wolf's nose of a sense for storytelling, I read Katharine Kerr: and you should too" - John Gilbert.

"Fear, an excellent example of high fantasy, Kerr's supremely confident, stylish presentation, along with a compelling storyline, place this very much at the thoughtful and quality end of the fantasy spectrum"- The Dark Side".