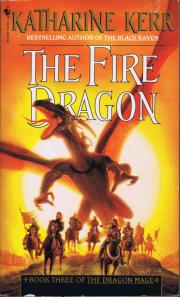 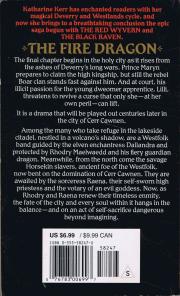 The eleventh and final book in the Deverry series completes the tales from "The Black Raven". In the present, Raena's trouble-making in Cerr Cawnen comes to a stunning end -- and the final reckoning for Rhodry's strange Wyrd. In the past, Nevyn and Lilli solve the riddle of the curse tablet, but at a cost that is higher than either of them anticipated. Katharine Kerr has enchanted readers with her magical Deverry and Westlands cycle, and pow she brings to a breathtaking conclusion the epic saga begun with THE RED WYVERN and THE BLACK RAVEN.

The final chapter begins in the holy city as it rises from the ashes of Deverry's long wars. Prince Maryn prepares to claim the high kingship, but still the rebel Boar Clan stands fast against him. And at court, his illicit passion for the young dweomer apprentice, Lilli, threatens to revive a curse that only she — at her own peril — can lift.

It is a drama that will be played out centuries later in the city of Cerr Cawnen.

Among the many who take refugein the lakeside citadel, nestled in a volcano's shadow, are a Westfolk band guided by the elven enchantress Dallandra and protected by Rhodry Maelwaedd and his fiery guardian dragon. Meanwhile, from the north come the savage Horsekin slavers, ancient foe of the Westfolk, now bent on the domination of Cerr Cawnen. They are awaited by the sorceress Raena, their self-sworn high priestess and the votary of an evil goddess. Now, as Rhodry and Raena renew their timeless enmity, the fate of the city and every soul within it hangs in the balance — and on an act of self-sacrifice dangerous beyond imagining.