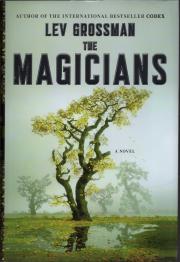 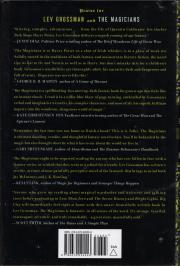 I lager
1 st.
Intellectually precocious high school senior Quentin Coldwater escapes the boredom of his daily life by reading and re-reading a series of beloved fantasy novels set in an enchanted land called Fillory. Like everybody else, he assumes that magic isn't real — until he finds himself unexpectedly to a very secret, very exclusive college of magic in upstate New York.

After stumbling through a Brooklyn alley in winter, Quentin finds himself on the grounds of the idyllic Brakebills College for Magical Pedagogy in late summer. There, after passing a gruesomely difficult entrance examination, he begins a thorough and rigorous education in the craft of modern sorcery while also discovering the joys of college: friendship, love, sex and booze. But something is missing. Even though Quentin learns to cast spells and transform into animals, and gains power he never dreamed of, magic doesn't bring him the happiness and adventure he thought it would. After graduation, he and his friends embark on an aimless, hedonistic life in Manhattan, struggling with the existential crises that plague pampered and idle sorcerers.

Until they make a stunning discovery that propels them on a remarkable journey, one that promises to finally fulfill Quentin's yearning. But their journey turns out to be darker and more dangerous than Quentin could have imagined. His childhood dream is a nightmare with a shocking truth at its heart.

At once psychologically-piercing and magnificently inventive, The Magicians is a sweeping epic of sorcery and other worlds that does much more than enlarge the boundaries of conventional fantasy bwriting. By imaging magic as practiced in the real world by real people, with their capricious desires and volatile emotions, Lev Grossman pays homage to the fantasy novels of C. Lewis, T. H White, and J. K. Rowling while, creating an utterly original realm in which good and evil aren't black and white, love and sex aren't simple or innocent, and power comes at a terrible price. The New York Times bestselling novel about a young man practicing magic in the real world, now an original series on SYFY

"The Magicians is to Harry Potter as a shot of Irish whiskey is to a glass of weak tea. . . . Hogwarts was never like this."
--George R.R. Martin

"Sad, hilarious, beautiful, and essential to anyone who cares about modern fantasy."
--Joe Hill

"A very knowing and wonderful take on the wizard school genre."
--John Green

"The Magicians may just be the most subversive, gripping and enchanting fantasy novel I've read this century."
--Cory Doctorow

"This gripping novel draws on the conventions of contemporary and classic fantasy novels in order to upend them . . . an unexpectedly moving coming-of-age story."
--The New Yorker

Quentin Coldwater is brilliant but miserable. A high school math genius, he's secretly fascinated with a series of children's fantasy novels set in a magical land called Fillory, and real life is disappointing by comparison. When Quentin is unexpectedly admitted to an elite, secret college of magic, it looks like his wildest dreams have come true. But his newfound powers lead him down a rabbit hole of hedonism and disillusionment, and ultimately to the dark secret behind the story of Fillory. The land of his childhood fantasies turns out to be much darker and more dangerous than he ever could have imagined. . . .

The prequel to the New York Times bestselling book The Magician King and the #1 bestseller The Magician's Land, The Magicians is one of the most daring and inventive works of literary fantasy in years. No one who has escaped into the worlds of Narnia and Harry Potter should miss this breathtaking return to the landscape of the imagination.