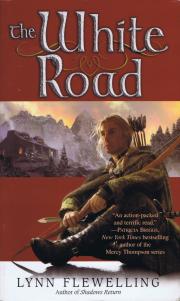 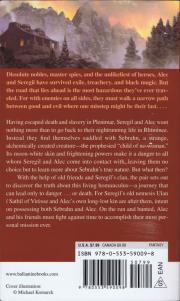 Dissolate nobles, master spies, and the unlikeliest of heroes, Alee and Segeril have survived exile, treachery, and black magick. But the road that lies ahead is the most hazardous they've ever traveled. For with enemies on all sides, they must walk a narrow path between good and evil where one misstep might be their last...

Having escaped death and slavery in Plenimar, Seregil and Alee want nothing more than to go back to their nightrunning life in Rhíminiee. Instead they find themselves saddles with Sebrahn, a strange, alchemically created creature - the prophesied "child of no-woman".
It's moon-white skin and frigtening powers make it a danger to all whom Seregil and Alee come in contact with, leaving them no choice but to learn more about Sebrahn's true nature. But what then?

With the help of old friends and Seregil's clan, the pair sets out to discover the truth about this living homunculus - a journey that can lead only to danger ... or death. For Seregil's old nemesis Ulan í Sathil of Virèsse and Alee's own long-lost kin are after them, intent on possessing both Sebrahn and Alee. On the run and hunted, Alee and his friends must fight against time to accomplish their most personal mission ever.