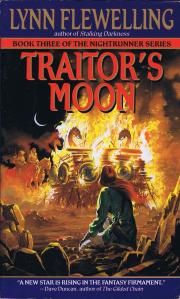 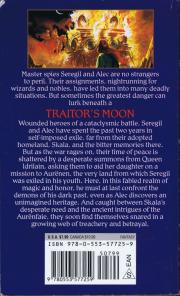 Master spies Seregil and Alec are no strangers to peril. Their assignments, nightrunning for wizards and nobles, have led them into many deadly situations. But sometimes the greatest danger can lurk beneath a Traitor's moon.

Wounded heroes of a cataclysmic battle, Seregil and Alec have spent the past two year sin self-imposed exile, far from their adopted homeland, Skala, and the bitter memories here. But as the war rages on, their time of peace is shattered by a desperate summons from Queen Idrilain, asking them to aid her daughter on a mission to Aurënen, the very land form which Seregil was exiled in his youth. Here, in this fabled realm of magic and honor, he must at last confront the demons of his dark past, even as Alec discovers an unimagined heritage. And caught between Skala's desperate need and the ancient intrigues of the Aurënfaie, they soon find themselves snared in a growing web of threachery and betrayal.