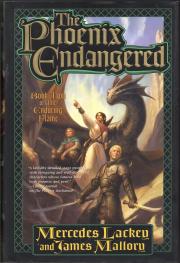 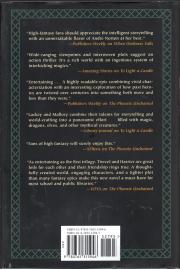 I lager
1 st.
Before he learned that High Magic was real, Tiercel Rolfart wasn't sure what he was going to do with his life. Now he knows: keep from getting killed long enough to somehow teach himself High Magic and try to save the world.

Harrier Gillain always knew that his role in life was to keep Tiercel out of trouble. He's still doing it-only now he's got to fend off attacks by a powerful, rogue Wild Mage. That Harrier is destined to be the first Knight-Mage in a thousand years isn't helping matters. Knight-Mages tend to get a lot of people killed, and Harrier doesn't like killing.

Hidden deep in the desert, Wild Mage Bisochim continues his attempts to restore darkness to the world-to fix the Balance. Despite the resistance of his Bonded dragon, Bisochim knows he's doing the right thing. When he's healed the Balance, then Saravasse will love him again.

The desert tribes have taken Bisochim's sermons on the damaged Balance to heart. They know that those who will not help repair the Balance are enemies, and young Zanattar and his followers are determined to destroy them.

One tribe has resisted Bisochim's siren call to war. Led by Shaiara, they have made the long journey into desert lands that even their fellow tribes consider mythical. Concealed from both magical and earthly searches, her people seek only peace. And then a huge black dragon dumps two weary young warriors on Shiara's doorstep.

Tiercel, Harrier, Shaiara, and the dragon Ancaladar seek desperately for a way to stop Bisochim and Zanattar, but the boys have only been Mages for a few moonturns. Can they really stop a war?