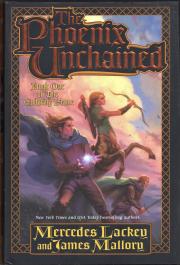 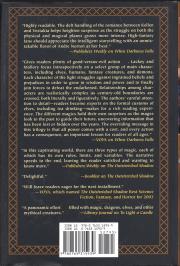 I lager
1 st.
For a thousand years, since the time of the heroic Kellen the Poor Orphan Boy and the Blessed Saint Idalia, the world has known peace. Humans live side by side with centaurs and brownies; Elves and dragons abide together in their own lands, far from the fleeting lifelines of humankind. Wild Mages appear only rarely and in times of great need, for the world is Balanced between Light and Dark.

When Bisochim, a Wild Mage of the desert, finds that the Balance has shifted too far toward the Light, he knows he has discovered his life's mission - he will return Darkness to the world. To his shock, his first attempt is thwarted. Bisochim now has not only a mission, but an Enemy.

Tiercel Rolfort is the eldest son of an Armethalian noble, destined to study Ancient History before settling into a predictable life helping run the City of the Golden Bells. Until his reading reveals a system of High Magic Tyr has never heard of before. Until Tyr decides to try to cast a spell and sets his bedroom on fire with a single thought. Until his dreams become haunted by a nightmarish vision of a lake of Fire with a beautiful, demonic woman at its heart...

Harrier Gillain is Tyr's best friend. Son of the Harbormaster, Harrier has been hauling Tyr out of scrapes since he was three years old. When Tyr decides to try to find the Elves and see what they know about High Magic, Harrier knows he'll have to go along. He's the practical one, after all, and someone has to make sure Tyr eats and sleeps and doesn't burn down the whole forest. Harrier has no idea that Tiercel isn't the only one about to discover a brand-new destiny.