Trustpilot
Du är på: Författare » Neil Gaiman » The Ocean at the End of the Lane

The Ocean at the End of the Lane 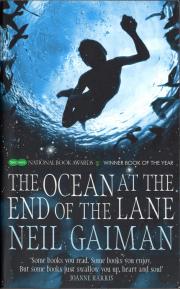 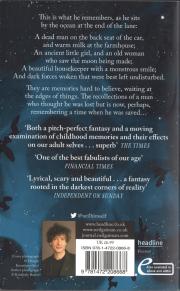 This is what he remembers, as he sits by the ocean at the end of the lane:

A dead man on the back seat of the car, and warm milk at the farmhouse;
An ancient little girl, and an old woman who saw the moon being made;
A beautiful housekeeper with a monstrous smile;
And dark forces woken that were best left undisturbed.

They are memories hard to believe, waiting at the edges of things. The recollections of a man who thought he was lost but is now, perhaps, remembering a time when he was saved...

WINNER OF THE SPECSAVERS NATIONAL BOOK AWARDS 2013 BOOK OF THE YEAR The Ocean at the End of the Lane is the bestselling magical novel from Neil Gaiman, one of the most brilliant storytellers of our generation and author of the epic novel American Gods, and the much-loved Sandman series. 'Possibly Gaiman's most lyrical, scary and beautiful work yet. It's a tale of childhood for grown-ups, a fantasy rooted in the darkest corners of reality' (Independent on Sunday). If you loved the mesmerising world of Erin Morgenstern's The Night Circus or were drawn into J.K. Rowling's magical universe, this book is for you. It began for our narrator forty years ago when the family lodger stole their car and committed suicide in it, stirring up ancient powers best left undisturbed. Dark creatures from beyond this world are on the loose, and it will take everything our narrator has just to stay alive: there is primal horror here, and menace unleashed - within his family and from the forces that have gathered to destroy it. His only defence is three women, on a farm at the end of the lane. The youngest of them claims that her duckpond is an ocean. The oldest can remember the Big Bang. The Ocean at the End of the Lane is a fable that reshapes modern fantasy: moving, terrifying and elegiac - as pure as a dream, as delicate as a butterfly's wing, as dangerous as a knife in the dark.