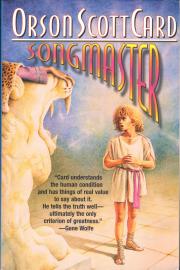 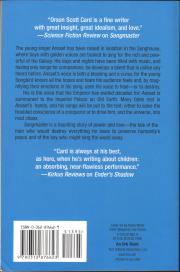 I lager
1 st.
The sphere is alien in origin, but has been controlled by man for millennia. A legend rules this constructed world: when the seventh seventh seventh human Heptarch is crowned, he will be the Kristos and will bring eternal salvation--or the destruction of the cosmos.

The young singer Ansset has been raised in isolation in the Songhouse, where boys with golden voices are trained to sing for the rich and powerful of the Galaxy. His days and nights have been filled with music, and having only songs for companions, he develops a talent that is unlike any heard before. Ansset's voice is both a blessing and a curse, for the young Songbird knows all the hopes and fears his audience feels and, by magnifying their emotions in his song, uses his voice to heal—or to destroy.

His is the voice that the Emperor has waited decades for; Ansset is summoned to the Imperial Palace on Old Earth. Many fates rest in Ansset's hands, and his songs will be put to the test: either to salve the troubled conscience of a conqueror or to drive him, and the universe, into mad chaos.

Songmaster is a haunting story of power and love—the tale of the man who would destroy everything he loves to preserve humanity's peace and of the boy who might sing the world away.