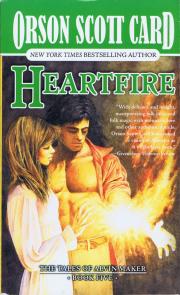 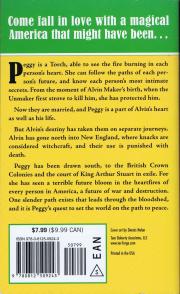 "With delicacy and insight, incorporating folk tales and folk magic with mountain lore and other authentic details, Orson Scott Card has evoked a vision of America as it might have been."-"Greensboro Tribune-Review" Peggy is a Torch, able to see the fire burning in each person's heart. She can follow the paths of each person's future, and know each person's most intimate secrets. From the moment of Alvin Maker's birth, when the Unmaker first strove to kill him, she has protected him.
Now they are married, and Peggy is a part of Alvin's heart as well as his life.
But Alvin's destiny has taken them on separate journeys. Alvin has gone north into New England, where knacks are considered witchcraft, and their use is punished with death.
Peggy has been drawn south, to the British Crown Colonies and the court of King Arthur Stuart in exile. For she has seen a terrible future bloom in the heartfires of every person in America, a future of war and destruction. One slender path exists that leads through the bloodshed, and it is Peggy's quest to set the world on the path to peace.