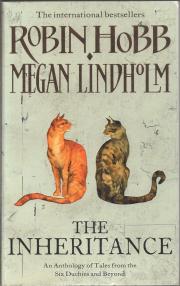 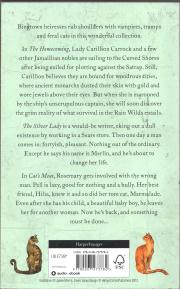 In The Homecoming, Lady Carillion Carrock and a few other Jamaillian nobles are sailing to the Cursed Shores after being exiled for plotting against the Satrap. Still, Carillion believes they are bound for wondrous Cities, where ancient monarchs dusted their skin with gold and wore jewels above their eyes. But when she is marooned by the ship's unscrupulous captain, she will soon dicover the grim reality of what survival in the Rain Wilds entails.

The Silver Lady is a would-be writer, eking out a dull existence by working in a Sears store. Then one day a man comes in: fortyish, pleasant. Nothing out of the ordinary. Except he says his name is Merlin, and he's about to change her life.

In Cat's Meat, Rosemary gets involved with the wrong man. Pell is lazy, good for nothing and a bully. Her best friend, Hilia, knew it and so did her tom cat, Marm lade. Even after she has his child, a beautiful baby boy, he leaves her for another woman. Now he's back, and something must be done...

A treasure trove of tales from a master storyteller--the first to feature works written under both her pseudonyms, Robin Hobb and Megan Lindholm . . .

Before she became an acclaimed "New York Times" bestselling author, Robin Hobb received resounding critical praise for work written under the name Megan Lindholm. Though they spring from the same imagination, Hobb and Lindholm are separate, diverse identities, each with her own unique style and perspective.

"The Inheritance" celebrates the boundless vision of Hobb and Lindholm, bringing together for the first time classic and new short works from both names. The collection is comprised of three generous offerings from Robin Hobb, including the title story, which makes its U.S. debut here, and a brand-new tale, "Cat's Meat." Megan Lindholm contributes her Hugo and Nebula Award finalist "A Touch of Lavender" and Nebula finalist "Silver Lady and the Fortyish Man," as well as several classic and new gems.

Each piece is prefaced by a brief yet informative author's note, offering insight into each story's genesis. Fascinating, compelling, and wonderfully entertaining, "The Inheritance" reveals the full spectrum of skill and talent of one of the world's finest fantasy writers.