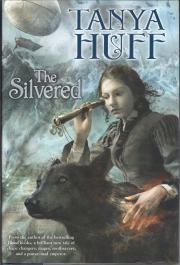 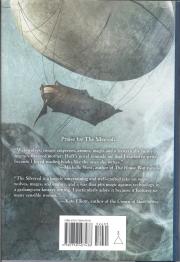 I lager
1 st.
The Silvered

"When wild and mage together come, one in six or six in one. Empires rise or empires fall, the unborn child begins it all."

It began with the prophecy made by the Imperial Soothsayer, a prophecy that had Emperor Leopald's army bent on conquering the small kingdom of Aydori. For Aydori was ruled by the Hunt Pack - shape changers who took the form of wolves—and the Mage-pack—masters of the six disciplines: air, fire, water, earth, metals, healing.

With its allies defeated, nothing stood between Aydori and the invading Imperials but its own troops, led by the Hunt Pack and aided by magecraft. What no one could have anticipated were the emperor's new weapons—from hot air balloons, to highly destructive long-range rockets, to guns loaded with the silver bullets so deadly to the Pack.

Even as his troops wreaked havoc on a broad front, the emperor sent a small group deep into Aydori territory to capture the six pregnant mages of the prophecy, using ancient magical devices that could nullify their powers, leaving them helpless prisoners.

It should have been a foolproof scheme. Captain Sean Reiter and his squad of Imperial soldiers easily captured five women of the Mage-pack, including the wife of the Pack Leader. Yet the prophecy said they needed six mages. So, while the majority of the squad headed back to the capital with their prize, Captain Reiter and a smaller group continued the search. And they came across Mirian Maylin.

The daughter of a well-to-do banker and a social-climbing mother, Mirian had scored incredibly high in the testing, which won her a place at the mages' university. Yet after a year there all she had accomplished was to qualify at first level in five of the six disciplines when she should have been achieving mastery in one. She hadn't even informed her parents that she'd been told not to return for further schooling. But when she witnessed the enemy capturing five women of the Mage-pack, Mirian had no choice but to head for the battlefront to report the kidnapping to the Pack Leader.

On the way, she fell prisoner to Reiter and his men. And it was only thanks to the intervention of the Pack Leader's younger brother Tomas Hagen that Mirian escaped. Tomas brought devastating news — news that sent the two of them on a desperate race to rescue the captured mages before they reached the capital.

But even as they pursued the squad, they were being pursued by Captain Reiter. While Mirian and Tomas journeyed through progressively more hostile lands, she worked relentlessly to improve her mage-craft and achieve control over her spells, leaving an all-too-obvious trail of incidents that could not be ignored.

The Mage-pack captives themselves were doing everything they could to escape before the emperor could implement his horrific plans for them and their unborn children, but time was running out. And even if Mirian and Tomas reached the capital before it was too late, what chance did they have against an ancient magic, the latest scientific advances, and a mad emperor's entire army?