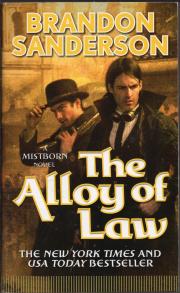 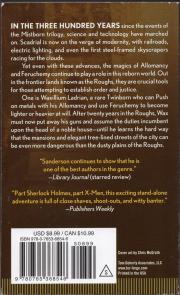 Alla varianter:
Bokformat:
Inbunden
Slut i lager.
Pocket
Slut i lager.
Three hundred years after the events of the Mistborn trilogy, Scadrial is now on the verge of modernity. Yet even as science and technology are reaching new heights, the old magics of Allomancy and Feruchemy continue to play a role in this reborn world.

IN THE THREE HUNDRED YEARS since the of the Mistborn trilogy, science and technology have marched on. Scadrial is now on the verge of modernity, with railroads, electric lighting, and even the first steel-framed skyscrapers racing for the clouds.

Yet even with these advances, the magics of Allomancy and Feruchemy continue to play a role in this reborn world. Out in the frontier lands known as the Roughs, they are crucial tools for those attempting to establish order and justice.

One is Waxillium Ladrian, a rare Twinborn who can Push on metals with his Allomancy and use Feruchemy to become lighter or heavier at will. After twenty years in the Roughs, Wax must now put away his guns and assume the duties incumbent upon the head of a noble house — until he learns the hard way that the mansions and elegant tree-lined streets of the city can be even more dangerous than the dusty plains of the Roughs.

"Sanderson continues to show that he is one of the best authors in the genre." —Library Journal (starred review) "Part Sherlock Holmes, part X-Men, this exciting stand-alone adventure is full of close shaves, shoot-outs, and witty banter," —Publishers Weekly Cover art by Chris McGrath