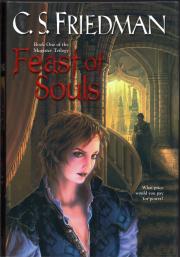 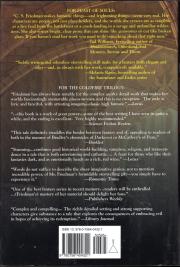 Alla varianter:
Bokformat:
Inbunden
Slut i lager.
Häftad
I lager
Pocket
I lager
At the end of her bestselling "Coldfire" trilogy, C.S. Friedman challenged readers to imagine what a world would be like if sorcery required the ultimate sacrifice-that of life itself. Now, in "Feast of Souls," she introduces us to a terrifying world in which the cost of magic is just that...in which the fuel for sorcery is the very fire of the human spirit, and those who hunger for magical power must pay for it with their lives. In this epic tale of nightmarish shadows and desperate hope, the greatest threat of all may not be that of ancient enemies returned, or ancient wars resumed, but of the darkness that lies within the hearts of men.

At the end of the Coldfire Trilogy, C.S. Friedman challenged us to imagine what a world would be like if sorcery required the ultimate sacrifice. Now, in a groundbreaking new fantasy novel, she introduces us to a terrifying new universe in which the cost of magic is just that... in which the fires of sorcery feed upon human life itself... in which the greatest threat may not be that of ancient enemies returned or ancient wars resumed, but of the darkness that lies within the hearts of heroes.

In the court of High King Danton Aurelius, young Prince Andovan lies dying of a mysterious malady known only as the Wasting. Desperate to save his son from this incurable disease, the High King summons a council of Magisters to aid him. These shadowy, seemingly immortal sorcerers rarely ally for any purpose, but in this cause they are willing to unite. For there is one fearsome secret the Magisters guard above all others, and that is the nature of the transformation that sets them apart from all other sorcerers, allowing them to draw on the power of a human soul without dying for it... a secret that might now be exposed if the High King learns too much about his son's illness. For the dread disease called the Wasting is in fact a sign that some Magister is stealing the young man's soulfire to fuel his sorcery, and that is a truth that must be hidden from the mortal world at any cost.

Now the Magisters must hunt down one of their own kind before the High King learns the truth, and find a way to sever the link between Andovan and his killer. But they have not counted on the young prince's determination to control his own fate, nor on the existence of a young woman, schooled in their own arts, who will soon shake their secretive society to its very roots.

Sold into prostitution by her peasant mother while she was still a child, Kamala has learned the hardest lessons life can teach. Her mane of wild red hair and her diamond-hard eyes reflect the wellspring of strength and defiance within her--a hunger to live by her own rules at any cost. Honed by cruelty and poverty, she has become a uniquely fierce creature, and with the help of a reclusive Magister may well become the first of her sex to master true sorcery. But at what cost to herself, and to her world?

Against a backdrop of glittering kingdoms and darksome prophecies these two young people will be forced to confront their destinies...while in the shadows of their world an ancient Evil is stirring for the first time in centuries, seeking allies in a cause more terrible than any living man can imagine.

Enter a world of terrifying shadows, desperate hope, and the final testing ground of the human spirit.