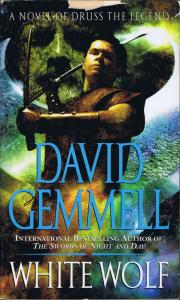 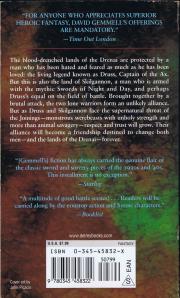 I lager
1 st.
Lässtreck på rygg, Rygg något sned, Rygg knäcktThe blood-drenched lands of the Drenai are protected by a man who has been hated and feared as much as he has been loved: the living legend known as Druss, Captain of the Ax.
But this is also the land of Skilgannon, a man who is armed with the mythic Swords of Night and Day, and perhaps Druss's equal on the field of battle. Brought together by a brutal attack, the two lone warriors form an unlikely alliance. But as Druss and Skilgannon face the supernatural threat of the Joinings—monstrous werebeasts with unholy strength and more than animal savagery—respect and trust will grow. Their alliance will become a friendship destined to change both men—and the lands of the Drenai—forever.

"[Gemmell's] fiction has always carried the genuine flair of the classic sword and sorcery pieces of the 1930s and '40s. This installment is no exception." - Starlog

"A multitude of good battle scenes! '... Readers will be carried along by the nonstop action and heroic characters." — Booklist