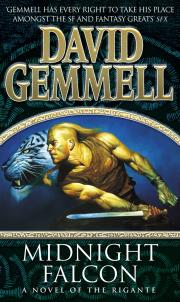 They called him Bane the Bastard - though none said it to his face - Born of treachery, his name a curse, he grew up among the warriors of the Rigante. They valued his skills in war, but they feared the violence in his heart. And when, as a Wolfshead and Outlaw, he left Rigante lands, they breathed sighs of relief.

But Bane would return, the destiny of the Rigante in his hands, the fate of the world resting on his skills with a blade.
Midnight Falcon continues the tale of the Rigante, which began in Sword in the Storm, and tells the epic story of Bane, the bastard son of Connavar the King, and his quest for vengeance in a world of blood, honour, betrayal and love.

David A. Gemmell's first novel, Legend, was first published in 1984 and went on to become a classic. His most recent Drenai and Rigante novels are available as Corgi paperbacks; all are Sunday Times bestsellers. Widely regarded as the finest writer of heroic fantasy, David Gemmell lived in Sussex until his death in July 2006.