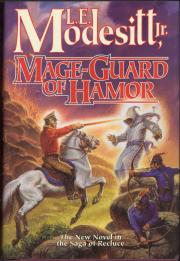 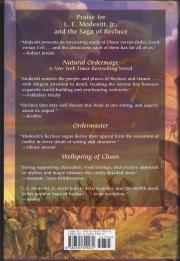 "This is a writer who cares about his characters and his world. This is disciplined fantasy, not fluff. L. E. Modesitt, Jr., is uncompromising when it comes to the effects of magic, both on the natural world and on the human heart. There are no cheap solutions to the problems of Recluce. Because of that, it is a world worth returning to." — Megan Lindholm (Robin Hobb)

"L. E. Modesitt, Jr. builds both his characters and his world with authority and innumerable subtle touches until they both convince. This is the sort of fantasy that takes on a life of its own, with realseeming people in an unreal but very believable and self-consistent universe even if Recluce does not exist, then it should."—Dave Duncan

Acclaimed bestselling author L. E. Modesitt, Jr., continues his saga of Recluce in Mage-Guard of Hamor This is the second of two volumes set mostly on the continent of Hamor, far across the sea from Recluce, where the saga began.

As a young apprentice on the island of Recluce, Rahl was sent to the mages training school for testing, then banished to Hamor. His education now continues under dangerous circumstances. In Hamor, his powers have increased, but so has the amount of trouble he attracts.

The whole society of Hamor is a new culture for Modesitt—and Rahl—to explore. one in which magic is a monopoly of the state. Rahl is a mage now, powerful and still just as dangerous to himself and to others. This is the story of how he gains both more knowledge and power, and more self-control.