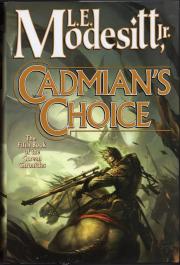 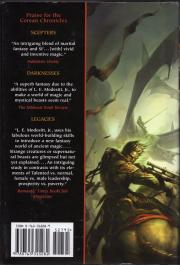 I lager
1 st.
"Offers us strong characters, a brand-new world with its own subset of peoples, magical beings, and beasties." SFRevu.com on Legacies

"A notable achievement." Booklist on Scepters


L. E. Modesitt, Jr., master of science fantasy, returns to the world of Corus to continue the epic trilogy begun in Alector's Choice. It is the story of the fall of a great civilization and the tale of Alector Colonel Dainyl and Captain Mykel, the Corean human with special abilities.

The world Corus has been redesigned to become the new home of a superior race from a distant world whose very life depends on drawing sustenance from the biological life force of a planet. Their plans are supervised by a staff of Alectors, who in effect rule the world. The Alectors alone have access to the huge flying pteridons they have bred and the superior weapons that underpin their psychic talents.

The time is now fast approaching for the transfer of the whole population from the old world nearly bled dry of life force to Corus. But neither the Alectors (who will be reduced in status when the real powers arrive) nor the local humans (who seem destined to become no more than cattle, though they know nothing of this) are ready. And the mysterious Ancient Ones, the true natives of Corus who were assumed to have died out in eons past, still survive, and they have their own powers. The situation builds toward an explosive climax.