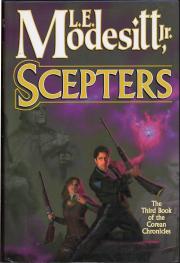 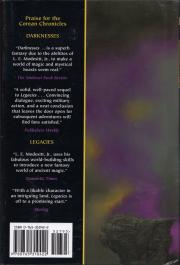 "[Legacies] offers us strong characters, a brandnew world with its own subset of peoples, magical beings, and beasties.. Old fans of L. E. Modesitt, Jr., will thrill at this new series because there is certainly enough of Recluce here to feel that you are back home without having to travel down the same old roads again. New fans will thrill at the prospect of being in at the start of a brand-new world!" —SFRevu.com

"L. E. Modesitt, Jr., is uncompromising when it comes to the effects of magic, both on the natural world and on the human heart." —Robin Hobb

The popular creator of Recluce and of the Spellsong world of Liedwahr has built a wholenew fantasy world on Corus. With each new volume of the Corean Chronicles we learn more about the magical underpinnings of this fascinating realm as we follow the continuing adventures of his reluctant hero, Alucius. In Legacies he became the first Iron Valley militiaman to escape sorcerous enslavement in Madrien. In Darknesses, he found a way to defeat a would-be conqueror who revived the fearsome creatures and potent weaponry of the legendary past. Now he returns to face the greatest challenges yet to both his courage and his magical Talent.

Alucius is happy back on his nightsheep stead with his beloved wife, Wendra, who is expecting their first child. But the country is beset by enemies on all sides. Although the Lord Protector of Lanachrona keeps his promise not to order Alucius back to active duty, Alucius finds his request for help no easier to ignore. Newly promoted to higher rank, and given command of a combined force of the Northern and Southern Guards, Alucius must first quell a strange, religiously inspired rebellion and then find a way to destroy the powerful weapons of ancient design again being used by the forces of Madrien. Unlike the Lord Protector, Alucius can see that a third, covert threat must be behind the other two. He will have to confront an alien evil that seeks to enslave the whole world of Corus in the guise of bringing back a lost golden age. Only the timely assistance of the mysterious ancient Soarers and the addition of Wendra's Talent to his own give him any hope of success. Scepters is a stirring climax to the first Corean trilogy.

L E. MODESITT, JR., lives in Cedar City, Utah. "Modesitt has established himself with his Recluce series as one of the best writers of fantasy. The fantasies are characterized by a highly developed and consistent system of magic. "—Vector