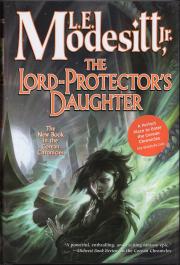 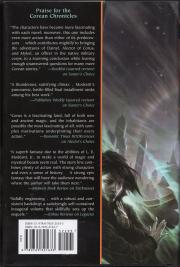 I lager
1 st.
With The Lord-Protector's Daughter, the popular author of the Recluce series offers a fantasy adventure, complete in one volume.

It takes place in Tempre, the capital city of Lanachrona on Corus, the world of Modesitt's Corean Chronicles (several hundred years after Soarer's Choice) Mykella, the eldest daughter of the Lord-Protector of Lanachrona, is trying to help her father with the business of running the land. But she discovers that someone is diverting significant sums of money from her father's treasury One of the ancient soarers appears to Mykella, telling her that she must go to the antique stone table in the cellars of the palace and find her Talent in order to save her land and her world. But she doesn't even know what the threat is. Surely not embezzlement.

But she goes to the ancient and legendary table in the subbasement of the palace and begins to learn things about herself, and about the legends of her world.

From there, matters become more perilous. There are attempts to remove Mykella and her sisters from Tempre by marrying them off to lords in neighboring lands, and fatal—and near-fatal—accidents occur to members of her family and trusted retainers. While Mykella develops a solid idea of who stands behind it all, and begins to reveal her knowledge and try to take action, every attempted solution is used to discredit her. How can she save their father and land? The answer to everything lies in her Talent, if she can survive long enough to use it.