Name Of The Wind 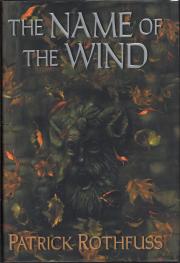 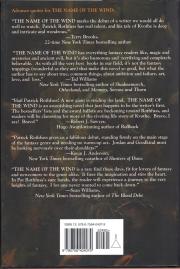 My name is Kvothe, pronounced nearly the same as "quothe." Names are important as they tell you a great deal about a person. I've had more names than anyone has a right to.
The Adem call me Maedre. Which, depending on how it's spoken, can mean The Flame, The Thunder, or The Broken Tree.

"The Flame" is obvious if you've ever seen me. I have red hair, bright. If I had been born a couple of hundred years ago I would probably have been burned as a demon. I keep it short but it's unruly. When left to its own devices, it sticks up and makes me look as if I have been set afire.

"The Thunder" I attribute to a strong baritone and a great deal of stage training at an early age. I've. never thought of "The Broken Tree" as very significant. Although in retrospect, I suppose it could be considered at least partially prophetic.

But I was brought up as Kvothe. My father once told me it meant "to know."
I have, of course, been called many other things. Most of them uncouth, although very few unearned.

I have stolen princesses back from sleeping barrow kings. I burned down the town of Trebon. I have spent the night with Felurian and left with both my sanity and my life. I was expelled from the University at a younger age than most people are allowed in. I tread paths by moonlight that others fear to speak of during day. I have talked to Gods, loved women, and written songs that make the minstrels weep.
You may have heard of me.

So begins the tale of Kvothe—from his childhood in a troupe of traveling players, to years spent as a near-feral orphan in a crime-riddled city, to his daringly brazen yet successful bid to enter a difficult and dangerous school of magic. In these pages you will come to know Kvothe as a notorious magician, an accomplished thief, a masterful musician, and an infamous assassin. But THE NAME OF THE WIND is so much more — for the storv it tells reveals the truth behind Kvothe's legend.