Servant of the Empire 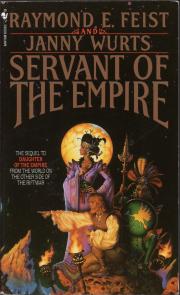 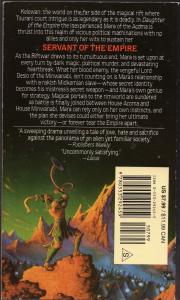 Kelewan: the world on the far side of the magical rift where Tsurani court intrigue is as legendary as it is deadly. In Daughter of the Empire the inexperienced Mara of the Acoma is thrust into this realm of vicious political machinations with no allies and only her wits to sustain her.

SERVANT OF THE EMPIRE

As the Riftwar draws to its tumultuous end, Mara is set upon at every turn by dark magic, political murder, and devastating heartbreak. What her blood enemy, the vengeful Lord Desio of the Minwanabi, isn't counting on is Mara's relationship with a rakish Midkemian slave — whose secret identity becomes his mistress's secret weapon—and Mara's own genius for strategy. Magical portals to the rimworld are sundered as battle is finally joined between House Acoma and House Minwanabi. Mara can rely only on her own instincts, and the plan she devises could either bring her ultimate victory—or forever tear the Empire apart.

"A sweeping drama unveiling a tale of love, hate and sacrifice against the panorama of an alien yet familiar society." Publishers Weekly
"Uncommonly satisfying." Locus