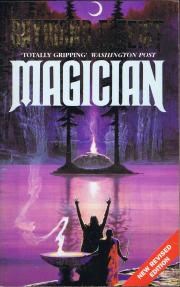 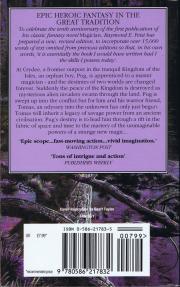 To celebrate the tenth anniversary of the first publication of his classic fantasy novel Magician, Raymond E. Feist has prepared a new, revised edition, to incorporate over 15,000 words of text omitted from previous editions so that, in his own words, 'it is essentially the book I would have written had i the skills I possessed today'.

At Crydee, a frontier output in the tranquil Kingdom of the Isles, an orphan boy, Pug, is apprenticed to a master magician - and the destinies of two worlds are changed forever. Suddenly the peace of the Kingdom is destroyed as mysterious alien invaders swarm through the land. Pug is swept up into the conflict but for him and his warrior friend, Tomas, an odyssey into the unknown has only just begun. Tomas will inherit a legacy of savage power from an ancient civilization. Pug's destiny is to lead him through a rift in the fabric of space and time to the mastery of the unimaginable powers of a strange new magic.