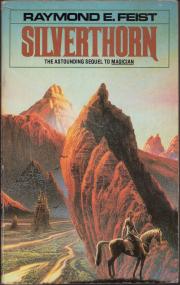 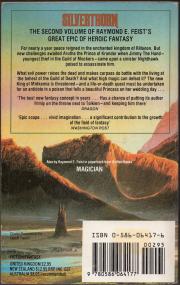 I lager
1 st.
For nearly a year peace reigned the kingdom of Rillanon. But new challenges awaited Arutha the Prince of Krondor when Jimmy The Hand - youngest thief in the Guild of Mockers - came upon a sinister Nighthawk poised to assassinate him.

What evil power raises the dead and makes corpses do battle with the living at the behest of the Guild of Death? And what high magic can defeat it? The new King of Midkemia is threatened-and a life-or-death quest must be undertaken for an antidote to a poison that fells a beautiful Princess on her wedding day.

The best new fantasy concept in years... Has a chance of putting its author firmly on the throne next to Tolkien - and keeping him there. - DRAGON

Epic scope... vivid imagination... a significant contribution to the growthof the field of fantasy - WASHINGTON POST