Faith Of The Fallen 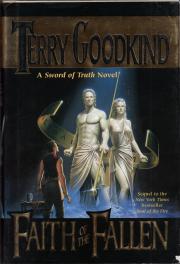 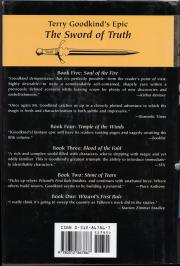 I lager
1 st.
Alla varianter:
Bokformat:
Inbunden
I lager
Pocket
Slut i lager.
A novel of the nobility of the human spirit.
A novel of ideas.

New York Times bestselling author Terry Goodkind returns with an extraordinary new novel of the majestic Sword of Truth. Richard, the Lord Rahl and the Seeker of Truth, has returned to his boyhood home, Hartland.

When a Sister of the Dark captures Richard, he makes a desperate sacrifice to ensure that his beloved Kahlan remains free. Taken deep into the Old World and forced to labor for the tyrannical evil he's sworn to defeat, he is determined to remain defiant even in the heart of darkness.

Kahlan, left behind and unwilling to abandon the cause of the Midlands, violates prophecy and breaks her last pledge to Richard. Finally she will come face to face with the architect of the terror sweeping her land—the mad dreamwalker, Emperor Jagang. While Kahlan faces Jagang's vast horde, Richard discovers the truth of the Imperial Order's rule. Forced to endure his ordeal without magic, without the Sword of Truth, without his love, he stands against the despair and soulnumbing regime of the Old World, his hope kept alive only by the knowledge of the rightness of his cause.
Bestselling New York Times author Terry Goodkind revisits his gripping Sword of Truth books with the eagerly anticipated Faith of the Fallen. In the sixth installment of this beloved series, Richard Rahl and Kahlan Amnell struggle against threats to the freedom of the world, testing both their endurance and their love for one another. As his beloved Kahlan lies close to death, Richard -- who distrusts prophecy more than anyone -- is confronted by a compelling vision that bears a terrible price: taking Kahlan away from the protection of the army he leads, and abandoning his people to a grim fate.

Kahlan, left behind and unwilling to abandon the cause of the Midlands, violates prophecy and breaks her last pledge to Richard. Finally, she will come face to face with the architect of the terror sweeping her land: the mad dreamwalker, Emperor Jagang, who is poised to unleash his formidable fury on the New World.

Meanwhile, in Emperor Jagang's sprawling encampment, Nicci, a Sister of the Dark, is tormented by her memory of Richard yet is captivated by the inexplicable strength that she saw in this gaze. Despite her hunger to understand the source of his indomitable will, her burning passion to destroy him commits her to the unthinkable and draws her into a haunting, epic conflict.

This latest compelling installment in the Sword of Truth series showcases Richard and Kahlan's further struggles against the relentless, monolithic forces of the Imperial Order, resulting in Goodkind's most captivating novel yet.