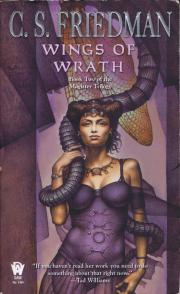 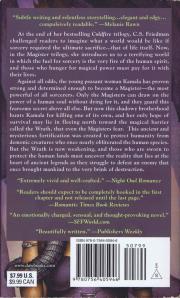 I lager
2 st.
Alla varianter:
Bokformat:
Inbunden
Slut i lager.
Pocket
I lager
At the end of her bestselling Coldire trilogy, C.S. Friedman challenged readers to imagine what a world would be like of sorcery required the ultimate sacrifice...that of life itself. Now, in the Magister trilogy, she introduces us to a terrifying world in which the fuel for sorcery is the very fire of the human spirit, and those who hunger for lagical power must pay for it with their lives.

Against all odds, the young peasant woman Kamala has proven strong and determined enough to become a Magister - the most powerful of all sorcerers. Only the Magister can draw on the power of a human soul with dying for it, and they guard this fearsome secret above all else. Nut now this shadowy brotherhood hunts Kamala for killing one of its own, and her only hope of survival may lie in fleeing north toward the magical barrier called the Wrath, that even the Magisters fear. This ancient and mysterious fortification was created to protect humanity from demon creatures who once nearly oblitirated the human species. But the Wrath is now weakening, and those who are sworn to protect the human lands must uncover the reality that lies at the heart of ancient legends as they struggle to defeat an enemy that once brought mankind to the very brink of destruction.