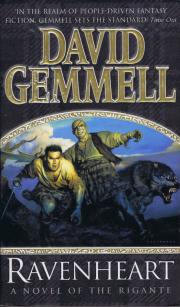 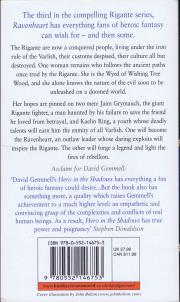 Alla varianter:
Bokformat:
Pocket -02
Slut i lager.
Pocket -02
I lager
The third in the compelling Rigante series, Ravenheart has everything fans of heroic fantasy can wish for — and then some.

The Rigante are now a conquered people, living under the iron rule of the Varlish, their customs despised, their culture all but destroyed. One woman remains who follows the ancient paths once trod by the Rigante. She is the Wyrd of Wishing Tree Wood, and she alone knows the nature of the evil soon to be unleashed on a doomed world.

Her hopes are pinned on two men: Jaim Grymauch, the giant Rigante fighter, a man haunted by his failure to save the friend he loved from betrayal, and Kaelin Ring, a youth whose deadly talents will earn him the enmity of all Varlish. One will become the Ravenheart, an outlaw leader whose daring exploits will inspire the Rigante. The other will forge a legend and light the fires of rebellion.

Acclaim for David Gemmell:
'David Gemmell's Hero in the Shadows has everything a fan of heroic fantasy could desire...But the book also has something more, a quality which raises Gemmell's achievement to a much higher level: an empathetic and convincing grasp of the complexities and conflicts of real human beings. As a result, Hero in the Shadows has true power and poignancy'
Stephen Donaldson