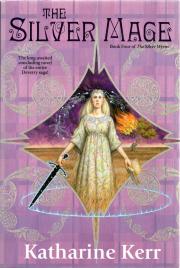 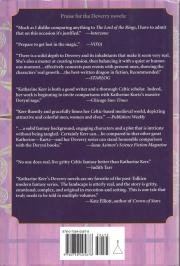 
For more than two decades devoted fans have been caught up in the spell of Katharine Kerr's bestselling Deverry novels, which tell a complex tale of ancient wrongs and of a timeless vow made to set things right.

With the publication of THE GOLD FALCON, THE SPIRIT STONE, and THE SHADOW ISLE, Books One, Two, and Three of The Silver Wyrm, Katharine Kerr began the long-awaited fourth and final cycle of the Deverry chronicles. Now, THE SILVER MAGE completes not only The Silver Wyrm cycle, but it brings to a conclusion the entire magnificent fantasy epic that began in 1986 with the publication of DAGGERSPELL, the very first novel about Deverry.

The wild Northlands hold many secrets, among them the mysterious dweomer island of Haen Marn, the mountain settlements of Dwarveholt, and the fortified city of Cerr Cawnen, built long ago by former Deverry bondmen.

Thanks to the Horsekin, who continue to push their religious crusade south toward the borders of the kingdom, the human beings of Deverry and their elven allies have realized that the fate of the Northlands lies tangled with theirs. Although the dwarven race holds strong, the island of Haen Marn has vanished, and the city of Cerr Cawnen seems doomed. Only through the magic of such elven Wise Ones as Dallandra and Valandario and the intervention of the powerful dragons, Arzosah and Rori, do the allied forces have a hope of mastering the secrets that can save the Northlands and themselves from conquest.

Taking readers from the earliest beginnings of the wars with the Horsekin to the final climactic battle for survival, unlocking at last the riddle of Haen Marn, and resolving the final destiny of Rori, the man bespelled into the body of the silver dragon, THE SILVER MAGE is a thrilling conclusion and a wonderful reward for the many loyal fans of Deverry.